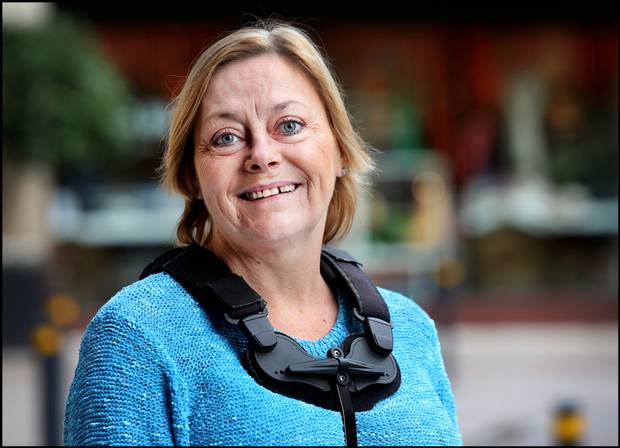 For years, Dolores Pearson had to endure painful fractures, with little information or support. But, she tells Joy Orpen, when she was introduced to a specialised fracture liaison service in Waterford, all that changed.

Dolores Pearson (59) has something in common with champion jockeys Ruby Walsh and Tony McCoy – she’s suffered an inordinate number of broken bones over the years.

But unlike those illustrious but sometimes battered champion equestrians, she has had to battle to get the medical help she so desperately needs. Fortunately, all that has now changed, as Dolores has finally been referred to a fracture liaison service (FLS) in Waterford, and has nothing but praise for the support she gets there.

Dolores grew up in Borris, Co Carlow. After school, she worked in a vocational education college. Then she fell in love with and married Michael Pearson, who is English. “His family originally came from Co Carlow,” explains Dolores. “So he used to come over on holidays.”

In 1989, she moved to London to be with her new husband. It’s a decision she doesn’t regret. “I loved it there. It was like Michael was a culchie born in London, while I was a Londoner born in the Irish countryside,” she says. “The opportunities for work there were brilliant. I got some legal training and ended up as assistant to a company secretary in publishing. I also worked at the Daily Mirror during the investigations into Robert Maxwell’s role in the newspaper’s pension-fund fraud. Meanwhile, Michael landed up in marketing at The Financial Times.”

Dolores says doing a job well in the UK paid dividends. “If you showed initiative and worked hard, you earned good money. The more I did, the more I got paid, which is how it should be,” she says. In their leisure time, Dolores and Michael had a good social life at their favourite pub. And they both like football. She is an ardent fan of Millwall, while Michael supports Manchester United. But they haven’t attended any matches recently, as the couple returned to Carlow many moons ago.

“Michael always wanted to come back,” says Dolores, adding, “So in 2000, we sold our house and went travelling for six months.” They spent half that time touring Australia, and the rest visiting the Far East, the US and the Bahamas.

They are now happily settled in Borris, which Dolores describes as a “lovely little village”. Unfortunately, she won’t be hiking up Mount Leinster, as her bones have become brittle. It’s a process that began in London in 1996.

“I was running up the stairs but lost my grip and fell backwards,” she explains. “I was taken to hospital on a spinal board.” The doctors discovered a vertebra (T10) in the middle of her back was fractured. Following a bone-density scan, Dolores discovered she had osteopenia – lower bone density than normal – and learned that she was prone to developing osteoporosis. “At that point, the only treatment I got was hormone replacement therapy (HRT), as I was short on oestrogen. There was no follow-up in London,” she says.

Once she returned to Ireland, Dolores remained relatively healthy until 2011, when she began to get shooting pains in her pelvis. Tests revealed that T11 and T12, the vertebrae following on from the previous injury, had collapsed. “I spent 11 days in hospital,” she says. “I was given pain relief, but no follow-up.”

In 2014, Dolores fell in her bedroom and suffered a compound fracture of her wrist. A metal plate was inserted during surgery.

The following year, she got breast cancer. In the midst of her chemotherapy, she shattered her ankle. Sheepishly, she admits it happened while she was tottering around in high heels at a wedding in Powerscourt, drinking ‘Bolly’.

As a result, she ended up in hospital for six weeks because, on top of the injury, she was having cancer treatment. Unfortunately, at that point, Michael had double pneumonia and couldn’t even visit his stricken wife. So it was indeed an annus horribilis for Dolores.

The following year, she sustained a desperately painful injury when she tripped over Michael’s legs and ruptured the tendons in her upper arm and fractured the ball of her shoulder joint.

In 2017, she slipped going out the front door, and even though she sought medical help, no injury was detected. She had no option but to endure the “horrendous pain” she was experiencing. Eventually, in desperation, Dolores’s doctor suggested she have an MRI scan done privately. Finally, it emerged that she had, in fact, sustained damage to her T7 vertebra in that fall, which had taken place a whole month previously.

So she was referred to the fracture liaison service (FLS) at University Hospital Waterford. “When they discovered my T7 was gone, they put me in a brace and I wasn’t allowed to take it off, not even in bed,” Dolores says. “After six weeks, I could remove the top part when sleeping. Following a bone-density scan, I was diagnosed with osteoporosis. And because I was signed up with the FLS, there was an automatic follow-up.”

In May 2018, Dolores was seen by a specialist FLS nurse, who went through the various tests and scans with her. “We compared the results of the previous year’s bone-density scan with the most recent one,” says Dolores, “and discussed my meds. I got more information at that consultation than I had ever got in the past.

“Before I was signed up with FLS, I’d go to this and that medical facility, and all I’d get was pain relief. This is a much more holistic approach,” she says, adding, “At the FLS, you’re constantly being assessed, you’re given advice on treatments, the correct meds, and your case is followed up automatically. This is all about prevention to save unnecessary suffering, and to cut long-term health costs. I can’t get over how amazing this service is.”

Dr Donncha O’Gradaigh, a consultant rheumatologist at UHW comments, “Because Ireland’s population is aging rapidly, the number of people suffering from osteoporosis is rising. An increasing number of patients with hip, spinal, and other fractures are seeking help from our hospitals. We could prevent a substantial proportion of these breaks by making fracture liaison services available. These services are proven to reduce fracture risk by diagnosing osteoporosis, providing bone-density scans and prescribing ongoing treatment.

He adds, “At present, there are only four of these services operating in Ireland, which needs to increase to a service at each of the 16 hospitals operating to repair fractures, and to provide proper post-fracture care for at-risk patients. By preventing fractures, we can drastically improve patient’s quality of life and health, as well as saving our health service a good deal of time and money.”

Dolores is fully supportive of these sentiments. “We desperately need these services in all our major hospitals,” she says. “It’s a vital service that helps prevent further injuries, frees up hospital beds and would, in the end, save the HSE a lot of money.”

Managing your OSTEOPOROSIS during COVID-19

Help your parent manage their OSTEOPOROSIS during COVID-19